Calligraphy is a nice library that provides custom font handling in Android. I once had issues with the MvvmCross layout inflation and knew that using Calligraphy with MvvmCross will cause some problems and I pushed it onto my Blog todo list - but I was lazy. But this week I saw a question on stackoverflow.

If you just want to get Calligraphy working.

done. You don’t need to override AttachBaseContext. And you can setup calligraphy via CalligraphyConfig.InitDefault as documented.

Why not use Calligraphy Xamarin?

There is already the NuGet package / Xamarin component called Calligraphy Xamarin. But it doesn’t offer the non public class CalligraphyFactory that you need for the fix. If you install it and follow the setup instructions, you will notice, that it won’t have any effect.

How does it work? 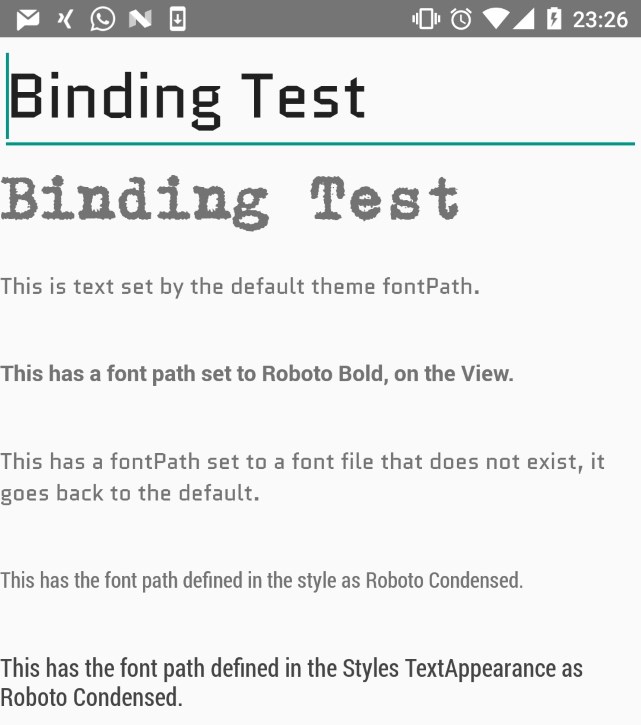 There is a nice side effect, using the factory directly. You don’t have to wrap every context (Activity, Fragment) with the CalligraphyContextWrapper, because the binding inflater is used globally :) Yay! MvvmCross.Calligraphy on NuGet

The code is available on github mvvmcross-calligraphy. It includes a sample project, too.

Background Photo by Karen / CC BY
Found a typo? Send me a pull request!